Not to brag here, but I have one of the best things possible in life: a neighbor friend who loves to garden and likes to have a drink sometimes in the afternoon. Both of us being mostly work-from-home/work-in-home ladies, the opportunity to enjoy an afternoon drink and good conversation with a longtime friend is just... the best. It pulls me out of my house/garden cube--which I'm pretty sure has a psychological force field some days, keeping me in my own space--and provides a touchstone for reflecting on life in its gradual progression. Her husband used to provide childcare for our son, and is still a beloved babysitter from time to time; we've watched our kids grow up together in a way which provides a lot of meaning and comfort for me-- I grew up going to 14 different schools, so the sameness and continuity is cherished, as well as her gardening advice.

Did I mention that she has cats? While we love our feline friends, we do have good cause to complain about them.

"That's why I don't let them in my bedroom, they would do that too. Mine brought in a dead rat and then the other one stole it from her and was playing with it. Stupid cats!"

"No kidding. Milton has been digging in the new garden bed I put in. I need more plants in there."

It was then that my girlfriend mentioned her simple solution: plastic forks she had left over from take-out meals. "Put them in the ground, fork side up. It totally stopped my cats from digging." Genius idea! Of course I had plastic forks galore-- I hate using the ones they pack in the meals, but didn't want the cosmic guilt of throwing away perfectly good single-use utensils on my conscience. That afternoon, I went out and put the forks in the garden, evenly spaced. Confident that the problem was solved, I showed the new arrangement to Joe.

Half-awake the next morning, Joe informed me that Milton hadn't minded the forks-- he'd kicked one over to the side and did his business as if to say "I'll pee where I want to, so there" , which can be rightfully translated as 'Fork you, you stupid human, think you can stop me with a little plastic do-hickey? Think again!'  I rolled my eyes, both at my failure and the fact that his paws were filthy-gross with caked mud in between the claws. Were my intentions rooted in cleanliness or revenge when I tried to wash his paws in running water? Who can say? That was also a miserable defeat.
Milton: 2, Hazel: 0.

There was only one solution... buy more plants. Milton is mostly an inside cat, but he is about one-hundred times smarter than Sally and far more determined. Sally is motivated by a desire to go outside while the sun is still rubbing its eyes awake; Milton is motivated by food and grudges, I'm pretty sure. Filling up the space was already on my list, so last night I made a plan. Inspired by the episode of Netflix's Chef's Table featuring Dan Barber of Blue Hill (he had a lot to say about rye!), a trip to Tabor Bread for an artisan baguette was in order. On the return trip, I stopped at Portland Nursery and picked up some more bee balm, dianthus, basil and sage. I decided a few weeks ago that I needed to add some culinary sage to the garden, as I've been making this amazing Halibut with Brown Butter and Sage pretty regularly. The basil-- hey, it's summer and grape tomatoes are going into the garden soon.
It was good to get to work. After some careful excavation to make sure no, um, leavings were buried, it was time to put the plants in. Thank goodness Sally was there to make sure I was doing it correctly. Once they were situated, I added a top dressing of mulch and gently walked on it to tamp it down, hopefully this will discourage any further digging. 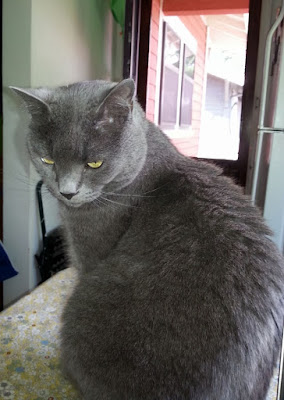