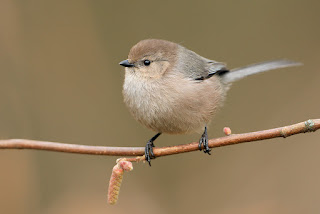 Long-term investments are my game. Last year for Christmas, Joe gave me some money to spend on myself and I brought home a big, tall, four-hook birdfeeder pole. For the past couple months, I have enjoyed the show in the backyard. Here's one of my buddies, a bushtit. They travel in groups, are rarely ever seen alone. Safety in numbers, I suppose. Cute as can be and excitement for the cats on cloudy days when they want to stay in.

In any case, one of the things about birdfeeders is that you have to wait for the birds to find it. They rarely just fly over, go 'Hey, lookie here, there's some food in that yard', and stop by. It happens more often than not that one or two birds somehow accidentally discover the goodies and then the other birds -- who are likely observing those first two- go "hey, what's that?" So, we now have a regular group of visitors: the black-capped chickadees, the bushtits, some juncos, and more. It took a while, and yes, I was a little impatient for my favorite avian visitors because you know me, I love my birdies. That said, the long-term investment is my thing. I value long friendships, long-term commitments. When I was a nanny, I toyed with the idea of becoming a doula. Ultimately, though, the idea of working myself out of a job on a regular basis meant a lot of change, and while I have learned that change is okay, as a rule, I try to cultivate consistency and stability. It's no coincidence that most of the families I worked for ended up being jobs over at least a few years.

Last month, after increasing feelings of conventional school not really meeting Kiddo's needs, Joe and talked (and talked and talked...) about the idea of doing something different. It's hard to be in a classroom where instruction happens faster than one can catch. It's hard to be in a classroom where other kids are big distractions for both the students and the teachers. Since our school district has worked to phase out what are typically called 'behavior' classes, there are a lot of children who are not getting their needs met in a standard classroom. Children who have a hard time of life in general, who need smaller groups, sheltering, and nurture from strong and caring teachers. Not as a punishment. Not because these children are bad kids-- they aren't. They are hurting kids. They have holes in their lives somewhere. I know some of their stories and they are heartbreaking. The typical classroom only becomes another hurdle to deal with. Too many children in their space and not enough loving arms to hold them. Teachers are being forced into roles more ideally suited to behavior specialists. Everyone feels the strain. This morning I walked home from drop-off after I'd had to report a full-blown fight between two youngsters on the playground. Things are not getting better for these children.

Kiddo is what one might consider a 'silent struggler'. He's not creating misbehavior, he gets along okay in class with his peers. Yet, when so many other kids are acting out, the fact that he's not keeping up with the instruction goes, in the moment, unnoticed. The rest of the class continues on with learning, and for typical learners who can keep up, this isn't a problem. For atypical learners, this can make them fall further and further behind. Self-esteem is eroded. A child declares himself 'stupid' for not being as fast and fluent as other classmates.

So when Kiddo was able to articulate that school was going 'too fast', I paid attention. Some days at school are good days, where he seems to have things down pat. Off routine, he struggles. In fact, he works so hard on a daily basis to do well at school that when he bumps into challenges, he feels bad about himself.

You would not know that this avid reader, bright-eyed boy was hurting unless you curled up with him as he was falling asleep and entered that magical time of sharing heart secrets. Or saw him wrestle with homework. Or noticed that his work doesn't always appear on the walls in the hallway with the rest of his classmates. You sort of have to be the kid's parent to notice those little things, to have that special time with a child when they drop their guard and share their world with you.

I am fortunate and blessed beyond measure to be my child's mother. We are fortunate and blessed for me to be able to be home during the day. With this little, hurting boy in mind-- a child who loves learning when it is at his own pace, broken down to his understanding--  we have decided to homeschool for fourth grade and see how things shake out. I am starting to dip my toes in already; we have been doing alternative homework for the last three weeks or so. When Kiddo chooses his homework projects, he is fully engaged. He can sit and work for far longer than he typically was able to before. His brain is hooked into his interests, he's learning things more easily because he finds the study interesting.

There are parallels to be noticed here, between myself and my child. It's easy for me to collect and remember the names of birds or plants because I am stimulated by them, fascinated, intrigued. If I see a bird I'm unfamiliar with, the information is searched out with a ferocious intensity to know. The worlds and study of birds and plants have their own esoteric languages, descriptions of attributes, their own rhythm and 'reasoning', as it were. Plants which were historically in cooler parts of the world often have more serrated leaf edges, to maximize the surface area of leaf to collect the most sunlight for photosynthesis. Flamingos are pink because they eat so much shrimp. Hummingbirds make these almost electronic sounds when they call to each other, but it's their notched tails and a speedy drop from the sky and a miraculously fast sudden rise which makes the male hummingbird's mating call.

Because I know these things, the world has become a richer, more amazing place for me to live. I want that richness for Kiddo, and I don't want to have to wait forever for him to get it. There is something so wonderful and yet so fleeting about childhood. My best memories are in the long, silent pauses in my young life. Laying in bed on a snowy night and then looking out the window to discover how bright and white everything is, almost like day. Walking alone and finding mule deer on the lava beds out in the Oregon Desert. Staying awake at night to watch a summer lightning storm and wondering if the light traveled from the sky to the ground or was it the other way around?

So many of those experiences could have been expanded on in study, exploration, and talking to those who knew the subjects better. Unit studies have always been attractive to me. It was primarily my modus operandus as a preschool teacher. We call it Emergent Curriculum-- find what the student is interested in and voila-- so much can be taught through that one theme. One of my favorite unit studies was sparked by the children's curiosity in holes. Holes. What are holes for? What is the purpose of this kind of hole, or that one? Humans and animals create holes for different reasons. My teapot has a hole for the tea to come out. Why do we have those holes in the wall? (electricity, folks!)
People have holes in their bodies, all around their bodies. Why?

Can you see I'm on fire? I'm dipping my toes in and the water is beckoning me. We will start in late June, do year-round homeschool with chunks of time off, shorter school days. Kiddo has already declared he wants to learn about Greek Mythology, so we'll start there, along with reading, writing and arithmetic. I'm assessing resources right now and things look promising. There is more room for choice for Kiddo, more room for him to take necessary breaks. "Scooter around the block two times, then come in for a snack and we'll move on to XYZ".... or doing nature studies at a park, or participating in labs at OMSI.

It's the long pauses, the long game, I want to live in. I know that education is a hot topic, no matter how you slice it. We have a long row to hoe, as it were. I want him to come out of his school years with a love of learning and not the weariness of having to manage himself in a chaotic, distracting environment. We'll still get together with his friends. We'll still see our neighbors and do things with them, just as we always have. It is great that we are so tied in with other loving adults, good friends, people to laugh with and learn from. I'm excited to see where this goes. It's not a reaction, this desire to homeschool, it's a measured response and also what Kiddo wants as well. He's been asking for it since kindergarten. It won't be easy. There will probably be more than a few days I will ask myself "what the heck am I doing?", but hey, parents have those days anyway. Just less, sometimes, if their kid is at school away from them.

Narelle said…
Good luck with the homeschooling. I look forward to hearing your progress.

It is something that I have considered a few million times with my three quirky kids. School can be a big compromise, which can be a valuable life lesson in itself. But when you know what your children are capable of and what they need to learn, it can be so hard seeing them not getting it.

The flexibility and following your child's interests would be so much fun.
February 13, 2016 at 6:14 PM

Robyn said…
Your writing is beautiful and I know you will kill it with the homeschooling. Good luck!!
February 14, 2016 at 6:35 AM

Laura said…
Refreshing! As someone who struggled through grade school and then through 4 years of college with the persistent desire to just learn what I wanted to learn rather than "consenting" to another person's curriculum, I am thrilled to read that someone else gets it. They get that some people have more potential outside of the normal classroom setting. After 17 years of schooling, there are skills that I have learned like reading, writing, math, a bit of history, but the majority that I "learned" has been forgotten because it was not important to me in the moment of the lesson. Natural learning where people educate themselves by trial and error or creative thinking (to make a personal connection to the topic) at their preferred pace is what I hope our schools will eventually adopt. It's a long shot for public systems, but I do think it produces higher quality people with self-awareness and curiosity.
May 13, 2020 at 4:46 PM