Well, this is certainly taking longer than I had thought......

When one breaks up with Facebook, it's not as easy as grabbing that extra pair of clothes and toothbrush and saying goodbye. Oh, not at all. Facebook, you were not a whirlwind weekend romance or a night's stay at a hostel on one's backpacking trip, easy to walk away from knowing one has everything one needs in one's pack. No, this isn't a quick pang of regret at a mistaken affair...

This really is the most conscious separation I've had to do, at least in the tech sector of my life. After nearly five years of being on Facebook, there's a lot that needs doing before my account is deleted. There are photos I want to save onto my desktop, posts I'd like to keep in a file somewhere --writing I could have done better on if I had not frittered away my time being mindlessly entertained by videos of silly humans. And cats, but they don't count here because cat videos are never a waste of time. They are one of the few things which can bring humanity joyously together, and if I have my way, every UN meeting would begin with boxes of kittens being brought into the assembly and a 15 minute mandatory petting session before anything pertaining to the actual business of world peace could commence.

I mention the kittens because this ties in with my other reason for leaving Facebook: we all need to chill the eff out a bit, and kittens coupled with reduced social media exposure seems like a winning combination. So, hey, here's Sally for you because, well, why not?

Miss Sally is a true companion; if you are outside, she would love to interrupt your work by floomping down and soliciting belly rubs and scratches behind the ears. The photo is from this morning: minutes before, I had planted in some Italian parsley and cilantro, and I guess this is her way of bestowing a blessing... "let me roll in the dirt near you, radiating my feline loveliness to help you grow".  As long as she doesn't leave any, ahem, offerings, we're good. 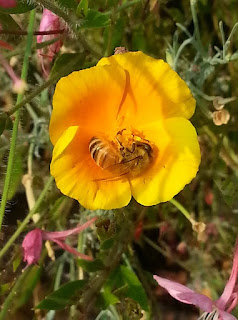 The garden is the primary reason everything takes longer these days. In the mornings, the dirt hollers at me to come out and play while it's still cooler. I'm pushing to get starts in for summer blooms, and they do look promising. Cosmos and zinnias and bee balm, oh my! I picked up a second six pack of zinnias because, well, one can never have enough of those bright, reliable cheerful things. The harder work comes with restructuring an old, larger bed into three smaller ones up front. This has been long task of digging out grass roots, carefully being respectful of the runners which shoot up to form those brilliant orange Chinese Lanterns (physalis, a member of the nightshade family and kissing cousins to tomatillos) and using hard materials to border them. I'm excited that things are coming together as they slowly do, and know this summer will burst into bloom in the best way. For now, the California poppies in the front yard are color enough, along with all those heavenly shades of spring's green.

As priorities go, I suppose it's Garden, House, and writing, or maybe Garden, House/Writing. I sat down to write this morning as a way to cool off from the work outdoors, but the dishes and laundry have their own siren song to lure me their way. (Is it a song, or more like a tiny, nagging nudge of "when is this stuff going to get done?" or "do you ever want clean clothes because you don't seem to be acting like it".) One thing at a time... so for now, I'm no longer actively participating in Facebook, but we've got a lot of splitting up ahead of us.
Email Post