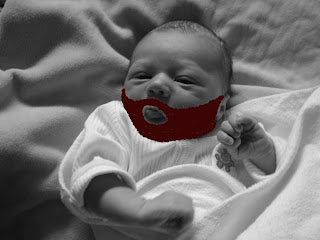 It's been one of those weeks. Baby still snotty from a cold, and while Joe was in Boston for work, Joaquin's first tooth surfaced. Those tiny serrated edges, those sore little gums...we have had some tough moments. I now understand why, not too long ago, rubbing their gums with a fingertip of whiskey wasn't frowned upon. I have to wonder if it is any worse than the unknown ingredients of the more-accepted Baby Orajel. I'm not sure, but we'll go the pharmaceutical route, as CSD doesn't get their knickers in a twist over those sorts of things. But personally, if something's going to make my tongue numb, I'd kind of enjoy having a little bit of a buzz to go with it...but that's just me.

A silly picture for a week that needed comic relief. This is Joaquin at Week One. Joe sent this to me one day with the caption "He's beginning to look more like his Daddy." Well, honey, let's start with the milk teeth before we move on to facial hair...

Friday night found me sitting in the kitchen with the lights out, a candle lit and a glass of petite-shiraz, looking out the window at the rainy twilight. My sister and I were on the phone, discussing the challenges of our guys being gone, either physically or just mentally not being present. "You have three, how do you do it when Ralph's away?" I asked. She said that when all else fails, a cozy time on the couch with a pile of books worked wonders. Ah, blankets and a good book, my two favorite things.

Although Joaquin is only seven months, we do like to read. "Angus and the Cat" by Marjorie Flack is a favorite and always is greeted with his little chubby-cheeked smile when I bring it out to read. Another we picked up from the library this week is "Wee Gillis" by Munro Leaf, illustrated by Robert Lawson. Leaf and Lawson are responsible for the wonderful story of Ferdinand the Bull--you might remember him as that mellowest of Bovine, who liked to 'just sit quietly and smell the flowers'. "Wee Gillis" is yet another story of a likeable protagonist whose individual proclivities and abilities don't necessarily render him a great fit for the future others envision for him. Gillis is a young Scotlander who is born of both the Highlands (his father) and the Lowlands (his mother) and comes to a point where he must 'choose forever' which he will be, a Highlander who stalks stags or a Lowlander who tends the long-haired cattle. That he finds his own solution to the limitations others impose is by chance, but utterly also by choice. I'm enjoying this book immensely and wish I'd discovered it as a child myself.

As for me, I've just finished Sefi Atta's "Everything Good Will Come". Atta is a Nigerian-born author and her debut novel left me with much to chew on afterward. The narrator is Enitan Taiwo, the daughter of an English-educated lawyer and an angry and restrictive mother who has turned to religion after the death of her young son. Both parents have high standards; her father would like for his daughter to be an educated, liberated young woman--a radical thought in 1970's Nigeria--and not be bound to the house and the kitchen, in the service of men. Her mother refuses to let her play with the outspoken and brassy neighborhood girl, Sheri Bakare. While Enitan cultivates her relationship with her young neighbor friend on the sly, her hometown of Lagos continues to exist in a state of extreme wealth and poverty and political unrest as coup after coup takes place in her country. At a tender age, a tragic turn of events serves to shape the girls lives for the next twenty years. The story that follows made me wonder a bit about my own place in the world, how my actions impact the lives of others, and what it means not only to be a feminist but a person with a conscience.

It's a rare book that reads so deeply; five pages feels like twenty, and the world Atta describes as so colorful and diverse, with so many different peoples living inside the same area ascribes as "one country" by colonial rule, can easily remind one of Iraq or other countries where so many people opposing religions are trying to live within a small area with a given amount of resources. Nigeria's main export is oil and there is much discussion of the concentration of wealth and power by one faction of the population, and what sort of poverty and despair can befall the rest who are not so lucky. In this militaristic society, Enitan sees firsthand the dangers of speaking out against the regimes, which are many, and must make choices to live as she has been taught by her elders and peers, or to live an authentic life. Sheri Bakare lives the life of a woman who understands the accepted and socially safe position of being a submissive woman while also manipulating that system to get what she wants and needs to live. Both women are wonderful examples of people who don't truly believe their world around them is correct in its perceptions of women, but they both find their paths in ways that feel true and honest for themselves.

Dealing with themes of global justice, gender issues, interfamily relationships and so much more, I'd highly recommend "Everything Good Will Come" to anyone with a book group.